Four weeks ago, Kofi Kingston became the first black WWE Champion at WrestleMania 35. While other wrestlers of color have held the world title, Kofi’s win was the first time a person of his ethnicity held the industry’s most coveted prize. What makes this accomplishment special is that it had nothing to do with race or color.

At the beginning of 2019, Kofi Kingston was nowhere near the WWE Title picture. On the way to  Elimination Chamber, the newly featured cruiserweight Ali suffered an injury. Kofi was his replacement, and the news was met with faint praise. Kofi’s cool and all, but come on now. It’s not like he was going to win, right?

Then, something amazing happened. Kofi reminded everyone how good he is by putting on an incredible performance in the gauntlet match to determine the last entrant to enter the chamber. In one hardworking hour, Kofi went from placeholder to the guy everyone wanted to win the title. Despite WWE’s lack of ability to keep things hot over a long period, Kofi’s popularity increased.

Augmented by the story of his eleven-year journey on the roster, the audience’s desire to see Kofi Kingston win the big one was irrefutable. The company switched plans, and we saw the result at WrestleMania. Kofi not only went over at the biggest show of the year, but he had the best match, which produced the most heartfelt moment at ‘the granddaddy of them all.’

The story of Kofi’s ascension, again, had nothing to do with race. Instead, the genuine question of a mid-card act becoming champion was used to develop the story. The hypocrisy of Daniel Bryan branding Kofi as a B+ player was the perfect ingredient. While many fans felt the race card would rear its ugly head, thankfully, it never did.

As a lifelong wrestling fan and a person of color, seeing Kofi Kingston win the title put some concerns to rest. Before Kofi, the fact there had never been a black WWE Champion made some people wonder if Vince McMahon was or is racist.

No one actually “wins” the championship; however, being booked as champion puts that wrestler in the lead role. Sports, television, music, and movies can have a person of color in the top spot; however, WWE never had?

What about The Rock? What about Booker T? Both are valid questions, but allow me to elaborate.

Booker T was the World Heavyweight Champion, which is not the same thing. The Rock was the WWE Champion. However, he is half African American/half Samoan and primarily identifies publicly as Samoan. Therefore, you cannot call Dwayne Johnson the first black WWE Champion.

In 2019, we have an African born WWE Champion who wears afro pigtails with pink accents, skips to the ring on a yellow brick road, throws pancakes out into the crowd and is all about that unicorn life. On paper, that sounds like a recipe for disaster. In reality, a fabulous performer name Kofi Nahaje Sarkodie-Mensah made it work exceedingly well due to his undeniable talent. 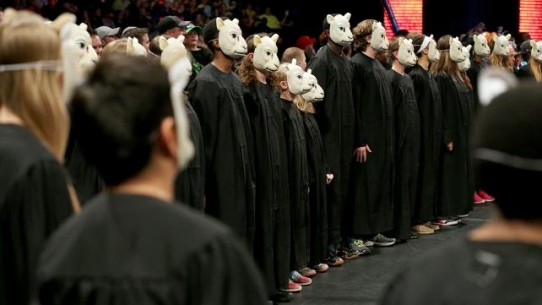 I really enjoyed Raw on Monday. Online chatter suggests the show was a failure and didn’t get them excited for Extreme Rules this Sunday. I saw something different. Yes, there were some things that made me scratch my head in confusion, but overall, it was a strong episode where the writing team has appeared to have gone outside of their wheelhouse and try different things. END_OF_DOCUMENT_TOKEN_TO_BE_REPLACED