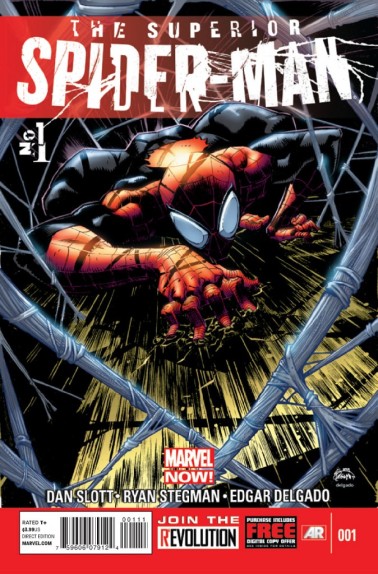 I should warn you now; this is not the Spider-Man you are used to.  Gone is the humble scientist who aspires to live up to his Uncle Ben’s inspiring words. Enter the arrogant mastermind who has a second chance to make a new impression. Recent developments have Otto Octavius now inside Peter Parker’s body. Big changes are always met with mixed feelings and now we get to see the maiden voyage of this new journey.

It’s fitting that Otto’s first combative strife is against the new Sinister Six. The irony of this encounter not only spoke to his ego but the violent nature of his character. The old Spider-Man was as violent as he needed to be to get the bad guy behind bars. This new version is as violent as he wants to be and pulls it off with a certain je ne sais quoi.

Ryan Stegman produced some strong visuals that did a great job of capturing Slott’s vision. The best way to compare Peter and Otto is that of a magician who can cut put someone in a box and cut them in half without killing them.

The difference is, Peter would not even consider taking a life while Otto would relish the fatality.

Something similar to a conscious overtakes Octavius when he is about to go past the point of no return. Is there someone more to this or is the once sinister doctor finding a new groove? Either way, Dan Slott created a wonderful first issue that shows promise, intrigue and a unique sense of adventure.