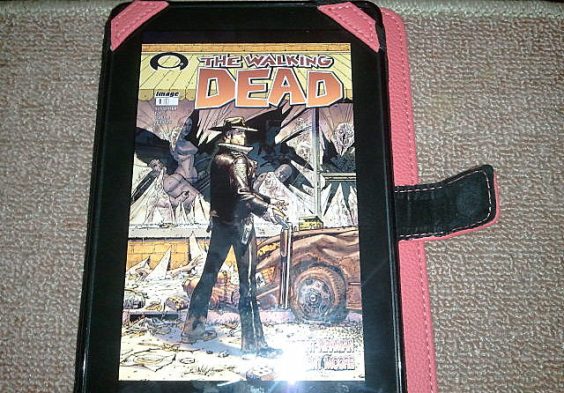 While Wednesday is just the middle of the week for most, It is new comic book day for those of us who live vicariously through 32 pages of color, action, and adventure. Yours truly lived in a galaxy far away at the local comic book shop when the average kid dreamed of being the next Babe Ruth at Little League. Hell, I still live in a galaxy far, far away while most spend their time being responsible adults. The Comic Book Shop is more than just its namesake. It’s a gathering for those who crave to escape from the everyday grind and socialize with others in the same boat. However, that may be coming to an end due to the rise of digital comic book sales.

2011 was a great year for the comic book industry, and a big chunk of that was due to the growth of digital sales. This trend increases every year, and it is a clear indicator that this is where the market is headed. I read some older titles on my desktop and IOS device, but I just wasn’t feeling it. Having to click a mouse and zoom in on certain panels dampened the experience for me.

The Kindle Fire came into my life, and my, oh my, what a wonderful world digital comics can be!  I read The Walking Dead’s inaugural issue on the Kindle, and I was amazed at how the technology makes the color and artwork pop. The pages don’t bend, I don’t have to worry about keeping the book in mint condition, and I don’t have to read it in a certain light because the tablet makes it easy to read anywhere. Instead of waiting until going to the comic book store after work, I can download them at my leisure, even when they are released at midnight, if I really want to get my read on. We save trees, I save money on bags, boards, and boxes, and make life a lot easier.

Despite all the advantages, digital media brings to the table, there is nothing like holding that comic book in your hand and getting lost in the adventure. The comic book store is more than a haven for fellow geeks; it’s a social networking site for those who enjoy conversing about Wolverine’s latest happenings, the new epic by Grant Morrison, and the artwork of the week by Andy Kubert. And don’t forget about the random store clerk recommendation of a title you never heard that could be the next big thing or the next big bust.

I suppose with everything in life, things change, and comic books are no exception. It’s a hobby I have enjoyed almost my entire life, and it’s not that I fear change; I just don’t want it in regards to comics. However, I now understand and embrace the positives that come with reading comics on a tablet. I’m newly married, and life is great, but someday, when children enter the picture, I will appreciate being able to swipe, click and download my comics while wrestling my kid into a pair of Huggies.