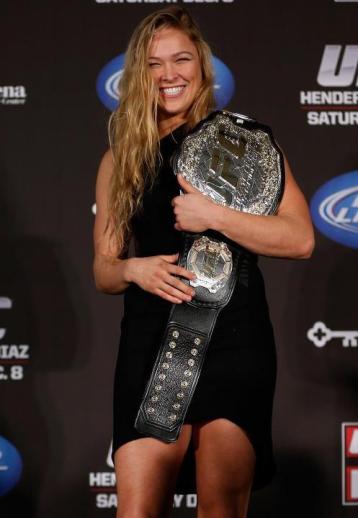 You probably didn’t know that two TUF winners and four former world champions are fighting at UFC 157. That’s because Ronda Rousey has captured the attention of anyone and everyone who even looks at mixed martial arts. Rousey is the fatal attraction of skill and beauty the UFC has been waiting for as she and Liz Carmouche, the first openly gay fighter in the sport, will headline Saturday’s card. Rousey’s Strikeforce title morphed into the UFC women’s Bantamweight championship when the company closed its doors.

While Gina Carano was a popular fighter who transitioned her success in the cage to the silver screen, her skill level was always questioned. There is no question that Ronda Rousey is highly skilled, and she might be the best female fighter on the planet. She appeals to males who want to see a pretty face and women who sincerely appreciate a strong and beautiful woman who speaks her mind. The buzz surrounding this fight is amazing but will it translate into a box office bonanza as this is the first time fans will have to pay to see Ronda Rousey perform?

If you’ve watched UFC Primetime, you know that Liz Carmouche is an accomplished individual with a great story who is fighting for more than a championship belt. She is fighting to keep food in the fridge, furniture for her apartment, and eventually a house for her and her spouse.

The Marine Corps veteran isn’t dwelling on her sexual orientation and looks at this prizefight opportunity as the chance of a lifetime. That being said, Rousey needs to win and win impressively. A subpar performance under the intimating bright lights will be detrimental to the advancement of women’s MMA. Everyone has heard the legendary tales of six first-round armbars. Now, she needs to live up to the hype.

From a promotional standpoint, the UFC is banking on and believes Liz Carmouche is going to lose. This could be a telling sign, or it could be just wishful thinking. Ronda Rousey is the strongest fighter at 135 lbs. Maybe in the female brand of the sport. Her superb ground game is topped off with her world-class Judo. Carmouche is tough and does her best work when she can control the pace. However, controlling anything about Rousey in the cage has been a fruitless endeavor, and much of the same should be expected this weekend.

The Pick: Ronda Rousey via 2nd Round Armbar.