This past Monday on Raw, The Rock unveiled the new WWE championship belt. Some like it, but most seem to hate it. Truth be told, I will take anything over that awful spinner belt. Sure, the diamond encrusted center plate looks a little bedazzled and is a far cry from a traditional design. It will take some getting used to but I think people will grow to like it.

As a kid, I hated the Winged Eagle belt that Randy Savage won at WrestleMania 4. I was at WrestleMania 14 where Steve Austin beat Shawn Michaels in the last match contested for the title. The next night on Raw, Vince McMahon presented Austin with what became known as the Attitude Era belt which is my favorite version of the championship. Today, I’m fond of the Winged Eagle belt as I’m ushered back to my childhood whenever I see it

Beauty is in the eye of the beholder as some belts look better than others and carry more prestige. Here are some thoughts the belt designs I’ve always enjoyed:

Old School IC title: The WWE Intercontinental championship is one the most revered and perhaps the most respected title belts among professional wrestling fans. For the longest time it was this championship that produced the most anticipated and exciting matches. More times than not, those who wore this coveted title were able to elevate their careers as a result. As a kid, I was more excited for the IC title matches than I was for the world title matches. Referred to as the “work horse title”, wrestlers such as Bret Hart, Randy Savage, Mr. Perfect, Ricky Steamboat, and Rowdy Roddy Piper made this title a cut above the rest. In my opinion, this is the coolest looking belt, ever. 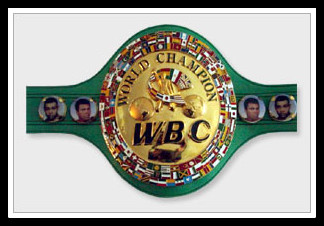 WBC Championship: The World Boxing Council is considered the crème de la crème for a championship prize-fighter. Champions of the sport’s twelve weight classes wear this title with no variation to the physical belt. Pugilists such as Vitali Klitschko and Floyd Mayweather Jr. represent the WBC as their world champion. The value of holding a championship has declined due to “money weight” fights. While the belt doesn’t carry the flash of a wrestling belt, it displays what a world champion represents. The center plate has the flag of every country professional boxing takes place in and the side plates show pictures of Joe Louis and Muhammad Ali to display the rich history of the championship.

NWA Television Championship: Holding this meant you were the best wrestler on television. TV title matches were held with a ten or fifteen minute time limit to ensure fans would see the entire match. The real design behind this was for the heel, who often held the title, to use the stipulation to their advantage and stall long enough for the time to expire and keep the title so the rematch would draw even more money. Arn Anderson is consider to be the greatest TV champion of all time with four reigns. The belt was silver instead of gold and the side plates displayed the logos of various TV stations making it a true championship of television.

2nd ECW Heavyweight title: Despite ECW’s hardcore style, the ultimate prize you are fighting for should have style, class, and be worthy of a champion. This belt debuted in February of 1997 when Raven was two months into his second title reign. Terry Funk, Shane Douglas, Sabu, and Bam Bam Bigelow held this version of the belt with Douglas retiring it in November of 1998.

Shane Douglas was kind enough to let me hold the title at an autograph signing in 1998. The super fan in me thought I would be lucky just to touch the belt, but was blown away when “The Franchise” took it a step further and said “You can hold it if you want, but just don’t run off with it. Otherwise, he will have to shoot you” as he pointed to a police officer.