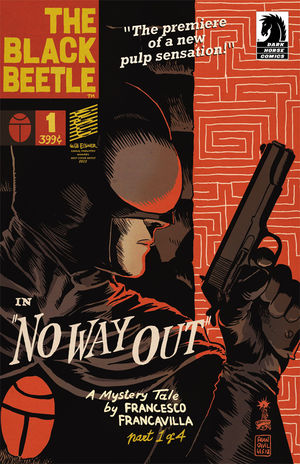 Comic Books are a mixed bag. Some are good while others are not so good, and then there are those that make you proud to be a fan of the genre. Besides being uber-talented, it’s hard to fathom how Created by produced such an outstanding read.

This is a crime/noir story of the past where mob bosses rule Colt City with an iron fist. Francavilla reveals some information about the Beetle’s character but we don’t know much about the man behind the mask. The sense of overall adventure captivates you from beginning to end.

Francavilla’s art has a retro look that enhances the pulp nature of this grand mystery. There is one panel in particular where the Black Beetle is flying through the air where the cut of his cape, flowing in the wind, makes him look like an actual beetle.

The style of Nate Piekos’ lettering was the extra cherry on top that made you feel you were reading a comic strip from the past. There is something to say about a comic that is shaped by one person. Not everyone can do it, but those who can are able to create something special. Francesco Francavilla is in a league of his own and anyone who is looking for something different will thoroughly enjoy the work of this Eisner award-winning talent. 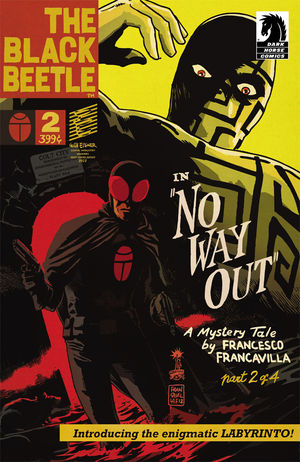 If you are looking for something new or something different to add to your personal pull list, you can stop looking because you found it! Francesco Francavilla has produced a brilliant homage to the pulp noir.

This comic book is exquisite from head to toe and amazes the reader at every turn of the page. Colt City’s mob bosses have been murdered and Black Beetle is hot on the trail until he finds some serious adversity in a foe that is one step ahead of him.

Bold statement time. Black Beetle might be a better detective than Batman. I know sounds ludicrous, right. The expertise in which Francavilla displays Beetle’s skills of deduction is simply awe-inspiring. The artwork is truly something to behold as its old-school flair shows that you can never go wrong with a classic as everything is drawn with such painstaking detail.

I have never had as much difficulty making my pick of the week as I did this week. I went with Daredevil #23 in the end but this series is truly something special and fans should enjoy the awesomeness that has been unleashed by Francesco Francavilla.