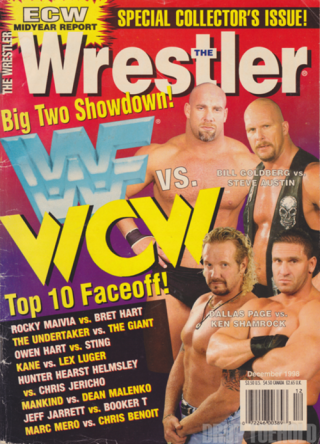 Before the days of internet web sites, these magazines is where one would go to for all the latest wrestling news. I was unaware of the Kayfabe nature of the articles that teased inter-promotional dream matches such as Sting vs. The Ultimate Warrior, that were impossible at the time. There were also speculative articles of wrestlers leaving one company for another. Sometimes it was true and other times it was tabloid gossip.

These magazines were filled with full color 8×10 candid photographs of various wrestlers that served as posters I hung on the wall in my room. For the longest time, I could never watch NWA shows on a regular basis so I would look forward to my monthly update through these coveted pages.

WWF and NWA never put emphasis on rankings so it was nice to see them listed in the magazine because for me, it gave wrestling that  real sports feel. I was also clued in on the existence of independent wrestling with articles on regional promotions and up and coming wrestlers.

With sales of WWE magazine in decline, it makes me wonder how much longer Pro Wrestling Illustrated will be around. You would have to think WWE outsells PWI by a reasonable margin considering one appeals to hardcore fans while the other appeals to casual fans and it is the casual fans that pay the bulk of the bills.

Honestly, besides reading an article here and there, I haven’t purchased or read an entire issue since wrestling web sites became popular in the late 90’s. Like a lot of print magazines, today, the advertisements outweigh the articles and why wait one month for news when few clicks of the mouse will give me the information immediately.

Part of me is sad because another piece of my childhood is being put out to pasture. Another part of me feels I have no right to care since I stopped buying them. These days, I prefer to read my comic books, magazines, newspapers, etc., on my Kindle Fire tablet.

Writing this blog may have been therapeutic. For old time shake, I think I’m going to pick up an issue of PWI on my next trip to the newsstand. Check out pwi-online.com where you can order the magazine in either print or digital format.

10 thoughts on “The Wrestler & Inside Wrestling Magazines Cease Publication”