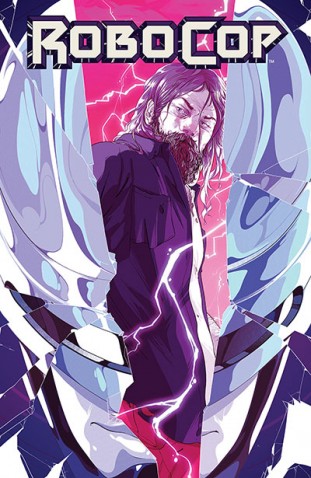 Robocop was the first R-Rated movie I indulged in, long before I was deemed to be the appropriate age by the Motion Picture Film Association of America. Ah, babysitters can be a child’s best friend. I’ve always had an affinity for the story because of how it doesn’t take itself too seriously while taking everything else seriously to produce the story of a cybernetic law enforcement officer. Jumping from the silver screen to the page, the majority of Robocop comic books are horrible because they fail to capture, at least, the core essential elements of the titular character. I stress “at least” because there are other items in the series that create a consistent mythos for the tragic and heroic tale of Officer Alex J. Murphy.

Joshua Williamson gets it. Instead of putting a completely different spin on the character, or trying to make things better or worse for the sake of shock value, Williamson brings us everything we loved about the first film while cleverly creating a narrative filled with action, suspense, mystery and intrigue. While Robocop is the hot commodity, Old Detroit is a character unto itself. Without it, essentially, there is no story. Williamson injects a lot of gratuitous violence and civil unrest, all stemming from the regular mood of the city which is inflated by a new gun control law.

There are a couple of new characters introduced, and one of them operates on both sides of the law, which makes me wonder if OCP knows this or simply doesn’t care. The dynamic between Murphy and Lewis is spot on and brings in some new elements that could put an end to their partnership. Their reaction to this possibility was both mysterious and hand-to-the-head obvious at the same time because while the human factor made you think one thing, prime directives called for another. There is also the tease of serious danger coming down the pipe for Robo as the baddie notices things about his abilities that could be used against him.

Carlos Magno does a phenomenal job of making the city look like a disgusting cesspool that is beyond saving. There is a chase scene in the middle of the book that perfectly shows how in sync the creators in this book are. A suspect escapes and Robocop says he will pursue on foot. Chalk that up to things that make you go hmmm because he can’t run, power walks at best, no jet pack, and the suspect has a head start. What’s a Robocop to do? Well, jump off the roof onto the suspect, of course! That image will have me thinking for days because he is the absolute last person I’d ever want diving after me from a great distance. Geez, I would beg for my Miranda rights before he could hit the ground.

When most people see a Robocop comic book on the shelf, that sense of immediate recognition takes place, and is usually followed by memories of previous comic incarnations, leading to the buyer passing on the product. I really hope that Williamson and company can keep the established tone consistent because it will go a long way in making this a series that stands out. They are off to a great start and hopefully, you will hand this book to the cashier while screaming “I’ll buy that for a dollar.”