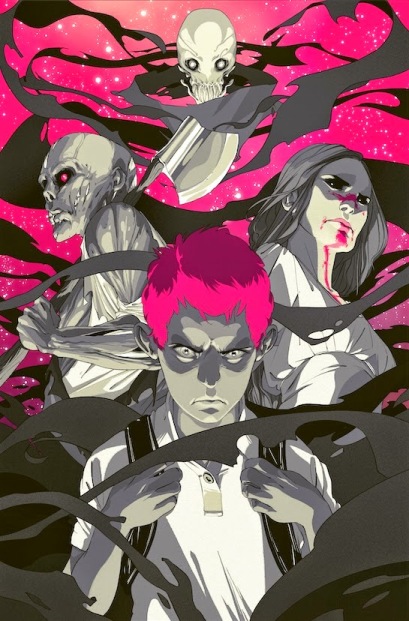 The Monsters of Jimmy Crumb is a successfully funded Kickstarter project helmed and written by James Patrick, who’s been a writer on Batman and Harley Quinn books.

I had no earthly idea that this book was even a thing. Thanks to a strong recommendation from the nice lady at the comic book store, I took this home and dove right in.

The story wastes no time, making me wonder what I had gotten myself into. The eight-year-old titular character reads an essay in front of his class while a ghostly-looking female is murdering people in adjacent scenes. My thought process immediately came to the conclusion that Jimmy was somehow going to somehow incur her wrath.

To say I was wrong is a huge understatement as it is Jimmy who makes monsters that we thought only existed in urban legend murder for him to exact revenge from a tragic incident that stole his childhood. The dialog is a little wonky at times, but the book is narrative-driven by events unfolding in a way where the reader thinks one thing, then something else occurs.

This is the strength of James Patrick’s writing as the story is constructed in a way where you never catch on to the bait and switch pattern of events. Jimmy’s classmate Haley appears to be a goody-two-shoes who can’t seem to mind her own business. Later on, we learn the real motivation behind her inquisitive nature, along with an unsettling detail from her past.

Jen Hickman does a great job of illustrating scenes and page layouts and uses the right color palates to augment the story’s tone. Her character work presents an animated style that made me think manga on a few occasions, especially on the cover. The facial expressions hit all the right notes but failed to play any music. Still, it didn’t detract from the experience one iota.

This was a book that I couldn’t down even if I wanted. The story and imagery drew me to such an extent that I had to take in everything. This isn’t so much a comic book as it is a brilliantly produced macabre experience that will keep you completely immersed from cover to cover.