This review is super, super late. That thing called life kept getting in the way. Plus, I’ve only seen the movie twice…TWICE!!! I could lose my street credit for being so lazy.

Star Wars takes its first steps into a larger world by going backwards in its mythology. Rogue One is the first standalone film to occur outside of the cherished episodic saga and for the most part exchanged fantasy for pragmatism.

The sheen of fantasy that’s exhibited in The Force Awakens is replaced with a tattered, war-torn luster that beautifully coincides with the narrative of how the Rebels stole the plans to the Death Star.

Much like Episode VII, we’re introduced to cast of new characters such as the rebellious Jyn Erso, played by Felicity Jones. Erso is tasked by the Rebel Alliance to contact her estranged father, Galen Erso (Mads Mikkelsen), who is the creator of the Empire’s super weapon.

While many of the new characters don’t leave an indelible impression, it’s certainly not a failure of conveyance, but a means to serve the story above all else. While we don’t get to know Rebel intelligence officer Cassian Andor (Diego Luna) as well as we know Luke Skywalker, we don’t need to. Andor is a freedom fighter whose difficult choices not only shed an unseen light on the Rebellion, but brings about some shades of gray in this black and white universe.

While films tend to be looked at and constructed in three acts, for me there are two acts here. The first hour is a Dirty Dozen style assembly of the team to steal the Death Star plans along with an exhibition of each character’s specialty. The second hour is the mission itself along with everyone’s contribution and how it ties into Episode IV. 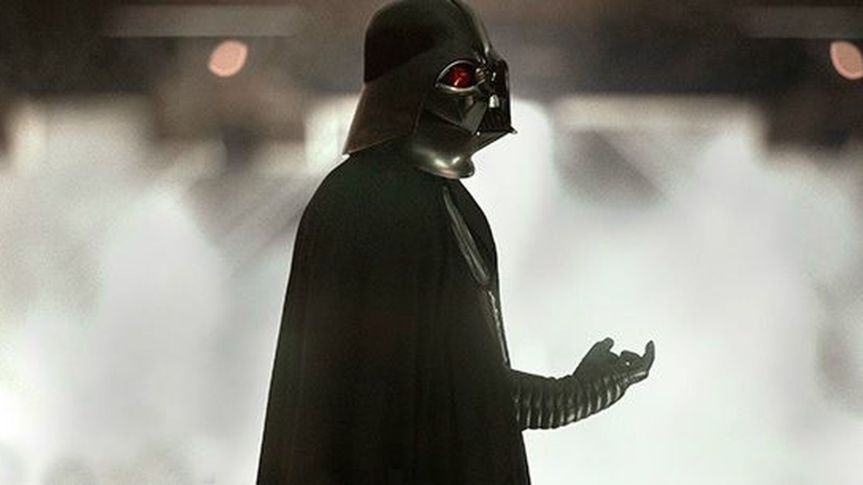 Speaking of characters, how about that Darth Vader?!

Well, besides one line of cringe-worthy dialog, Vader is used in small doses and at the times when he was needed most. After years of waiting while dredging through the deplorably whiny “From my point of view the Jedi are evil,” we finally got the Darth Vader that we deserve.

J.J. Abrams spoiled fans with a bevy of practical effects in The Forces Awakens, which harks back to the beloved ascetics of original trilogy. Rogue One made heavy use of CGI while keeping one foot in the practical realm to create that lived in universe motif.

Peter Cushing’s Grand Moff Tarkin was brought back via CGI to a mixed reaction from fans. While the character’s artificial movement and posture was noticeable, it didn’t take me out of the film. The gravitas that Tarkin brings to the story out ruled any technical details that were absent because this is a character that needed to be in the film.

Let talk about the music…it’s awful.

It’s a generic science fiction score that is devoid of any soul, even when bits of John Williams iconic numbers are weaved in. However, Oscar-winning composer Micheal Giacchino deserves a pass for his work here. Disney only gave him four weeks to make it work after the film’s prolonged reshoots caused the original composer Alexandre Desplat to leave the project.

Between the movies, books and animated shows, the creative synergy of Director Gareth Edwards, along with writer Tony Gilroy, fashioned an extraordinary film plucked from the most essential tale of a tale within the lore.

For all the splendor that Rogue One accomplishes, its pièce de résistance lies in the closing moments of the film that not only builds upon but also augments A New Hope. The chilling finale made me want to cry out of sheer appreciation for its brilliance as the execution of the film’s crucial moments utterly conveys the gravity of what’s to come for Luke, Han, and Leia.