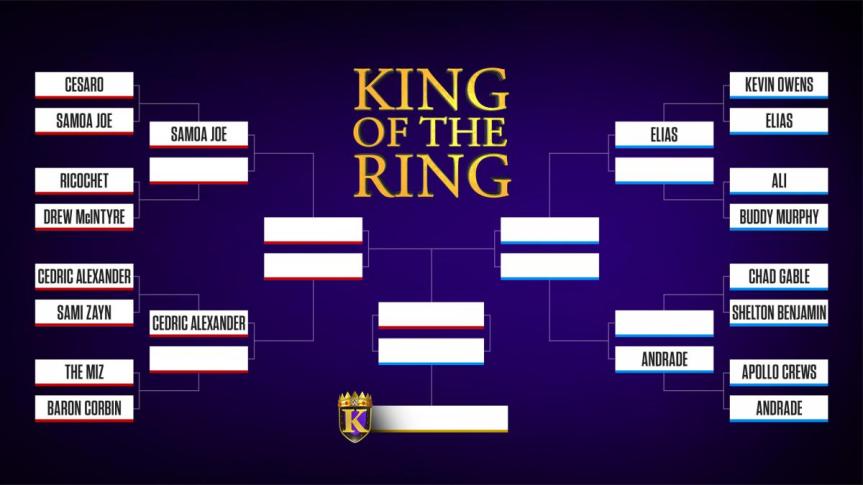 Welcome to my late to the party King of the Ring brackets. Since 1985, nineteen wrestlers have held the distinction of being King of the Ring. This year’s tournament will be the first in four years with sixteen wrestlers vying for the crown. The first, second, and third-round matches will occur on Raw and SmackDown. The finals will happen at Clash of Champions on September 15th.

As you can tell by the official bracket pictured above, I’m late to the game when it comes to predicting the field. Four matches have already taken place. I swear on my great grand pappy’s soul I predicted Samoa Joe and Cedric Alexander would win their first-round matches.

On the SmackDown side of the bracket, I predicted Elias and Andrade would advance to the second round. However, unlike the Raw matches, I have proof of my SmackDown picks I made before the show began.

King of the Ring has done a lot for wrestler’s careers. It helped launch Stone Cold Steve Austin and Triple H into superstardom, kept Bret Hart a hot commodity after losing his first WWF Title, and revitalized Booker T’s career as he became the most entertaining KOTR winner (All hail King Bookah!).

So, who will reign supreme in 2019? My complete bracket is posted below.

Buddy Murphy and Drew McIntyre are set to have a fantastic tournament. Murphy, representing SmackDown, got a massive win over Daniel Bryan last night. WWE is not going to squander all of the former cruiserweight champion’s momentum.

His first-round match with Ali will be a show-stealing affair. Kevin Owens will get his revenge on Elias and cost him the match against Murphy. Andrade and Murphy will tango in a SmackDown finale that will be nothing short of amazing.

Drew McIntyre will beat Ricochet in an explosive contest. In round two, “The Scottish Psychopath” will stop Samoa Joe in a hard-fought battle. McIntrye and Cedric Alexander will meet in the Raw finale in what will be a repeat performance of last week’s amazing match in Toronto.

Murphy is on fire right now; however, McIntyre has been the apple of WWE’s eye. He’s has everything going for him as a performer. Clash of Champions will be the time when they begin the main event ascension of Drew McIntyre by crowning him King of the Ring.