It seemed like only yesterday when Lyoto Machida vs. Gegard Mousasi was the definitive dream fight being wished-for among die-hard MMA fans. However, fate had other ideas. Within a three-week time span, an out-of-shape Mousasi lost the Strikeforce light heavyweight title to King Mo, and Machida had the UFC light heavyweight title unconsciously taken from him by Shogun Rua. A new weight class and four years later, we have the combative chess match we’ve been waiting for. END_OF_DOCUMENT_TOKEN_TO_BE_REPLACED

Vince McMahon couldn’t have booked a better finish as Ronda Rousey did what many debuting fighters, with a lot of press, fail to do. She lived up to the hype. Rousey’s 7-0 record brings her tally to seven armbar finishes in the first round. Liz Carmouche deserves a ton of credit after having the champion in trouble early and has undoubtedly increased her stock in defeat. Dana White said it best “She will get her kitchen table now.”

Ronda Rousey’s armbar is officially the first finishing move of Mixed Martial Arts. Like Ric Flair’s Figure Four Leg Lock and Bret Hart’s Sharpshooter, you know it’s coming, and you can’t do anything about it. Unlike the worked nature of professional wrestling, Rousey can’t put all of her eggs in the armbar basket and will have to add new weapons to her arsenal. If not, it will be a bad day when someone eventually breaks her grip.

END_OF_DOCUMENT_TOKEN_TO_BE_REPLACED 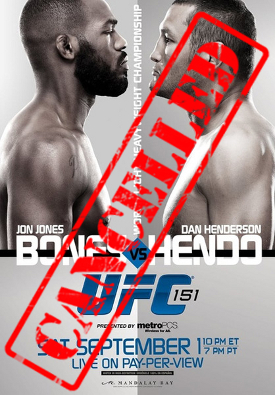 If you have been living under a rock, you are unaware of the story that has engulfed the MMA landscape. For the first time in the history of the Ultimate Fighting Championship, a pay-per-view event has been canceled. This unprecedented move has caused a firestorm of controversy, with venom being spewed in several directions.

Everyone has their own opinion on the subject, but the big question underneath all the chaos is: who’s to blame? Do we blame Jon Jones for refusing to fight with Chael Sonnen, who accepted the bout on eight days’ notice? Does the blame belong to Dan Henderson, who suffered the injury in the first place? Or, perhaps, the blame falls on some other element that is hiding in plain sight. END_OF_DOCUMENT_TOKEN_TO_BE_REPLACED

Many elite fighters have entered Jackson’s Mixed Martial Arts in Albuquerque, NM. None of them are more reputable than Rashad Evans, however. That is, until Jon Jones became the pinnacle of the light heavyweight division. Jones’ rise to prosperity and eventual clash with Evans surprised no one. The former champion however paints a different picture of a pact not to fight forged by solidarity and friendship. The idea of them fighting each other was the elephant in the room that no one wanted to bring up. Sometimes a good friend can prove to be your fiercest rival.

END_OF_DOCUMENT_TOKEN_TO_BE_REPLACED

(Column I wrote for gerweck.net)

UFC 140 appears to have been lost in the shuffle with everyone focused on Lesnar vs. Overeem at the end of the month and all the new fights announced for FX and Fox in early 2012. The Air Canada Centre in Toronto will be treated to its second UFC event that will feature a native featherweight favorite, two all-star bouts and a world title fight that will set the landscape of the light heavyweight division.