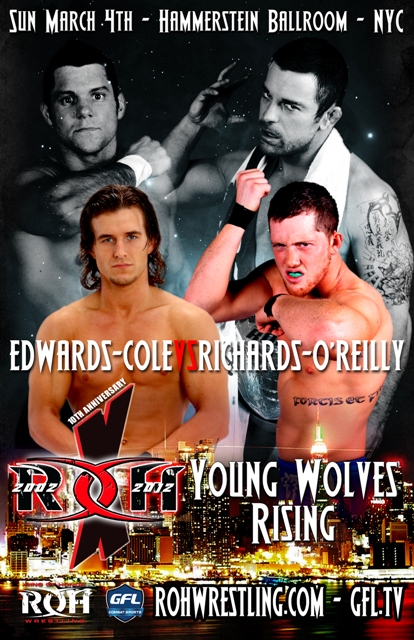 Special Attraction: Mike Bennett defeated Homicide with a school boy after being distracted by Maria Kanellis and Brutal Bob Evans.

– ChiKara Grand Champion Eddie Kingston came out for s special interview and Kevin Kelly announced a co promotion event between RHO and ChiKara titled “Synergy” in Chicago. Kevin Steen came out and wanted to make an alliance with Kingston where they destroy both promotions and rebuild them in their own image.

Kingston said no and Steen tried to sucker punch him and Kingston blocked it and a pull apart brawl ensued. Steen was the only man left in the ring with the ChiKara Grand Championship belt and went to urinate on it but several wrestlers from ChiKara, Jigsaw, Green Ant and Fire Ant, jumped the rail and stopped him.

-Tommaso Ciampa interview where Ciampa said he has nothing to lose and Lethal has everything to lose, his health, career and title. He says tonight he will be the first undefeated champion in ROH History.

ROH World Television Championship: Jay Lethal and Tommaso Ciampa wrestle to a 15 minute time limit draw. An great match where Ciampa hit Lethal with the Kryptonite Krunch on the ring apron and teased a count out but they got back into the ring in time. They exchanged punches to the end of the time limit and Tommaso hit Lethal with “Project Ciampa” left the building with Lethal’s TV title belt.

– Highlights of best matches of last 10 years of ROH during intermission.

NO DQ – Grudge Match: “Wrestling’s Worst Nightmare” Kevin Steen defeated Jimmy Jacobs when he hit him with an F-5 on top of two steel chairs. Steve Corino came out to stop the match before it started because he didn’t want to play into Steen’s hands but Jacobs hit Steen from behind and the ref stated the match.

After the match, Davey shook Cole’s hand and O’Reilly said he would not sake the hand of people he doesn’t respect. Kevin Steen interrupted them and said he would shoot Davey with a colt 45 if he could and he will be Davey’s own personal until he can talk Jim Cornette into giving him a title shot “You #JiuJitsuJackoff. Oh yeah trending worldwide” He also said “Young wolves rising is the worst name I have ever heard and it should have been called Steen steals the show”

This is the first time I have watched an internet PPV and the first ROH event I have seen in a while. I’m sure the fans in attendance had a great time but I was bored. The energy and excitement that was most likely in the Hammerstein Ballroom did not translate well on PPV at all. It felt more like a house show than an anniversary show.

The main event tag team match went way too long and it seemed there goal was to hit every submission and wrestling move in the book instead of telling a story. After watching this I never want to see Slaps, Chops, Kicks, Forearms, Power Bombs or Super Kicks as long as I live.

Lethal vs. Ciampa was match of the night and it was really nice to hear true professional wrestling commentary from Kevin Kelly and Nigel McGuinness. You remember what wrestling commentary used to sound like, right? You know, commentators who called the moves in the ring and put over the match instead of the bullshit you hear on Raw and Smackdown.

Oh, and Kevin Steen is the man and truly stole the show. This was my first time seeing him in action and he is a tremendous heel who has the crowd in the palm of his hand.