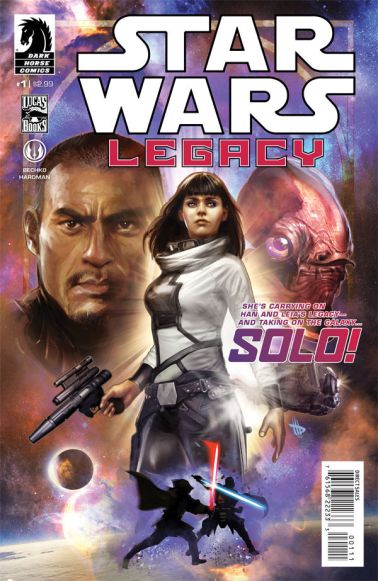 Dark Horse goes back to the Legacy saga of Star Wars and follows Ania Solo, Han and Leia’s great-great-granddaughter. This all takes place 138 years after “A New Hope,” which pretty much frees the creative team of any continuity issue.

Corinna Bechko and Gabriel Hardman are renowned for their work on the “Betrayal of the Planet of the Apes” series because of the strong character work, which gave real and important stakes for everyone involved. That trend continued in this opening installment of a new legacy.

The Jedi Council, The Imperials, and the Galactic Alliance have formed Triumvirate to keep peace in the galaxy. The script shows how uneasy this peace really is as each branch tries to push its own agenda to the forefront and is quickly reminded of how things need to be done in everyone’s best interest. These moments are subtle and tense at the same time because it augments this idea that faction warfare is on the horizon.

Ania Solo is a young lady who is tough, clever, spunky, and like her great-great grandpappy, she is not afraid to shoot first.  At first, it was kind of depressing seeing her searching for scraps in a junkyard to make ends meet, considering her lineage. However, this shows how far the family name has fallen in the galaxy, which means her namesake’s reputation will do little good.

Ania’s confidant is an engineer named Sauk, a timid soul that gets a lot of guff because he is a Mon Calamari. You feel for Sauk not only because of the treatment he endures, but he resonates with the reader because he looks an awful lot like Admiral Ackbar. I’m not sure if this was by design, or maybe all Mon Calamari look alike. Either way, the resemblance will have you screaming, “It’s a trap.”

The tone of the artwork was gritty and almost unrefined, which was a great way of showing what life is like in this day and age in the Star Wars universe. If you weren’t sold on this the first time you read it, read it again. I did, and I’m happy I did as Bechko and Hardman have set the stage for what might be an epic adventure.