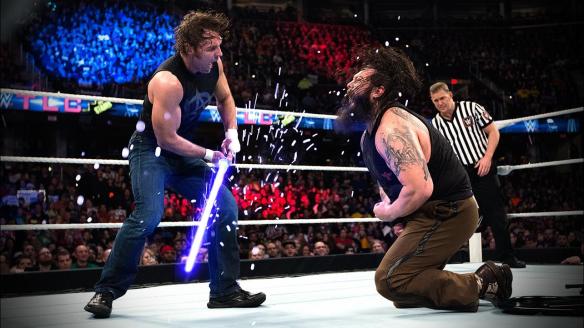 The highly anticipated trailer for Star Wars: The Force Awakens will premiere this evening during halftime of the Giants vs. Eagles Monday Night Football Game on ESPN. The game officially starts  at 8:15 PM EST and the trailer is expected to air between 9:45pm and 10:00 PM. While this is great news for Star Wars fans, this could be horrible news for WWE.

Last Monday, Raw scored its worst ratings in 17 years due to the combination of Monday Night Football and playoff Baseball. The product has been anything but interesting over the past thirty days with the ratings slipping lower and lower each week. What made the lowest recorded rating even more interesting is that Raw lost viewers every hour when they usually go up every hour.

Tonight, once again, Raw has to contend with Monday Night Football, playoff Baseball, and now the added competition of the new Star Wars trailer. WWE already scheduled special guests Ric Flair and Shawn Michaels to appear along with Brock Lesnar and the Undertaker being in the same building for the first time since their controversial match at Summer Slam.

This isn’t the first time a football game has been used as a promotional vehicle to debut a trailer. However, Disney owns both ESPN and Star Wars, so the marketing machine is in full effect. Plus, halftime could occur at any time due to the stop and start nature of football.

This isn’t just another teaser trailer being released, though, this is the full trailer that will finally reveal what the movie is actually about. Also, after the trailer airs, tickets for The Force Awakens will go on sale.

While WWE faces the very real possibility of Raw scoring a rating even worse than last week’s, they have an ace up their sleeve that could prevent such a record low in the form of Stone Cold Steve Austin. After Raw, Austin will sit down with Brock Lesnar for a special Stone Cold Podcast on the WWE Network. Raw emanates from Dallas, Stone Cold will be in the building and was originally scheduled to be on the show until his name was pulled last week without explanation.

Hell in a Cell is this Sunday, which means tonight will serve as the last big push for the pay-per-view. Booking Steve Austin to appear along with producing a stellar show could ensure a not-so-dismal rating. Otherwise, there will be a great disturbance in the Force, as thousands of voices will suddenly cry out in terror from WWE world headquarters.