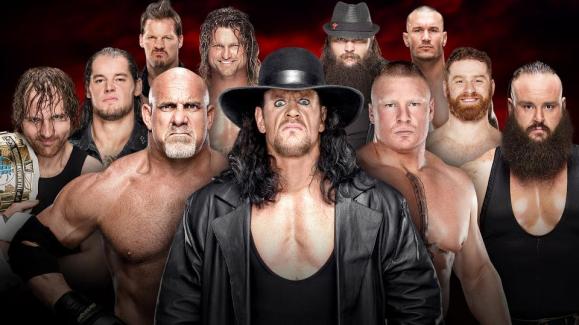 This Sunday’s Royal Rumble card appears to be finalized with eight matches that will be rounded out by the 30-Man Rumble match. The Kick-Off show will begin at 5:00 pm EST with the official pay-per-view beginning at 7:00 pm EST.

What I’m digging about this year’s Rumble is that I have absolutely no idea who is going to win. Normally, it’s easy to figure out the winner well in advanced based on story-line direction or if a particular wrestler is getting a main event push.

AJ Styles and John Cena will duke it out for the WWE Championship while Kevin Owens and Roman Reigns will battle in a No DQ match for the Universal Championship, which leaves four main event players out of the Rumble.

Twenty two of the Rumble spots are filled, which leaves eight openings. There will probably be some surprise calls up from NXT along with a legend or two to fill the remaining vacancies.

Undertaker, Brock Lesnar and Goldberg are the three big favorites to go all the way. Brawn Strowman and Baron Corbin have been getting pushes on their respective brands, making them favorites in a different light.

Chris Jericho deserves to be in the discussion as a possible winner since his break up with Kevin Owens inevitable, which will lead to a match. Why not make it a Universal title match at WrestleMania?

Chris Jericho is the most entertaining performer in WWE right now. And it’s all because of how well he uses a clipboard called “The List.” He’s also the most notable superstar to never win the Rumble so this could be his year.

Unpredictability has made the build to this year’s Rumble the best it’s been in several years. Make sure you check the site tomorrow for our Royal Rumble Preview and Prediction show where Adam Kohn and I breakdown and of the news and rumors heading into the Almodome this Sunday.

🚨@provinggroundhd presents ‘Ultimate Alliance’ on 8/21 at the Black Box Theater in Peabody, MA
Anyone else having issues with @peacocktv ??? #MITB
Night 1 of #FyterFest is in the top five of #AEWDynamite episodes.
RIP “Mr. Wonderful” Paul Orndorff
Bandido wins the ROH World Championship at #ROHBITW. They certainly didn't make him feel like a champion. He got beat the majority of the match, wins out of nowhere, and beatdown by LFI to close the show.
Chelsea Green appears at #ROHBITW, announces she's signed with the promotion, and threw some shade at her former employer.
Follow Ringside Logic on WordPress.com