Does the WWE have a clause in their contract with Santa Claus that he has to receive a yuletide beating each year? Around the holidays every year, the Santa Claus character receives a squared circle thrashing, in some way, shape, or form. Sometimes, a suspect Santa gets a fist in the face and other times, the genuine article gets a body slam for his troubles. Trust me, no one is safe, not even someone as pure and jolly as Santa Claus, from the shenanigans of professional wrestling. 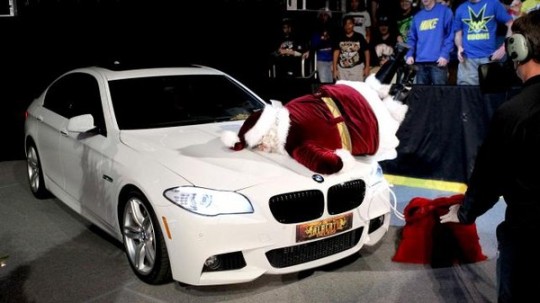 This years Christmas Eve episode of Monday Night Raw opened with attempted vehicular manslaughter as Alberto Del Rio hit Santa Claus with his one of his luxurious cars. A fleet of EMTs rushed to give Santa some much needed medical attention. Children all over the world, as well as WWE superstars, were concerned about Santa’s well-being. This lead to the Smackdown General Manager, Booker T, to make a “Miracle on 34th Street Fight” between Del Rio and John Cena.

On an episode of Raw in 1997, Stone Cold Steve Austin had a run in with Santa. Of course, this particular Santa Claus was anything but jolly as he kicked a little kid out of the ring because he was expecting Sable. Austin suspected this wasn’t the real Santa and delivered his own present to St. Nick in the form of a Stone Cold Stunner. Jim Cornette beautifully called this moment on commentary with the line “HE CRACKED KRIS’S KRINGLE!”

Christmas Night, 1989, Bobby Heenan had to dress up as Santa Claus on an episode of Prime Time Wrestling. Heenan lost a bet with Roddy Rowdy Piper on a previous episode of the show, causing him to don the big red ensemble. Near the end of the episode, Heenan started talking about how Santa isn’t real, debunking all the myths and revealing all of the secrets. Gorilla Monsoon was desperately trying to get the production truck to cut to a match with the Bolsheviks while Piper warned Heenan to stop telling lies. In typical Heenan fashion, he kept egging him on and Hot Rod puts the boots to him. This concluded with a dramatic apology from Monsoon, on behalf of WWE and USA Network, and Piper was relieved from his hosting duties on Prime Time Wrestling.

This was the first full episode of Prime Time Wrestling I was allowed to watch since it wasn’t a school night. I was sitting on the floor, right in front of the Christmas tree, playing with my newly acquired King Kong Bundy and Junkyard Dog figures (courtesy of LJN). My Mom couldn’t believe what she was seeing unfold as I just laughed at Bobby Heenan getting his comeuppance.

The tongue and cheek aspect of professional wrestling will always lend itself to having visions of suplexes dancing in our heads, as long as a holiday vehicle is needed to celebrate the coming to town of, or the demise of Santa Claus.