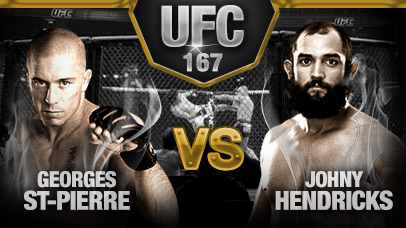 Time flies when you’re having fun. The particular period of time I’m referring to is the 20 years that the UFC has been in existence. This milestone will be celebrated on Saturday night at the MGM Grand Garden when the greatest welterweight of all time faces his toughest challenge to date.

The words, Toughest challenge, seem to be a constant when talking about Georges St. Pierre’s fight path. Every opponent for the last four years has been an increase in difficulty on paper. Josh Koscheck was outwrestled at will and kept at bay with a punishing jab, Condit was beaten into sheer frustration, and Shields and Diaz were outclassed in every aspect of the fight.

With a professional record of 15-1, Johny Hendricks is the newest “toughest challenge” on the champion’s dance card. This time, however, the threat is very real. GSP wins most of his bouts with superb wrestling, but this time he is facing a better wrestler who has two NCAA National titles to his credit. Koscheck was also a better wrestler on paper, but Hendricks is a more rugged and in-your-face grappler who has the one-punch knockout power that St. Pierre has shown to be susceptible to.

Georges St. Pierre has proven to be the ultimate game planner, so there is no doubt that he will takedown Hendricks at some point. It may take more tries, and it may be harder to do so, but he will find a way. If he can keep him down, St. Pierre should control the top position because we have never seen Hendricks work off his back, and he might have to do so against the best in the world. If he can’t, St. Pierre is going to have to go for a decision by constantly taking down Hendricks while keeping him guessing as to where and when the shot is coming by alternating his attack from body locks to shooting in for a single or double leg.

History shows that GSP doesn’t do so well when the bout goes from a fencing match to a dog fight. Johny Hendricks has the ability to not only do just that but also has just enough finesse to finish the fight. While we have never seen Hendricks work off his back, that doesn’t mean that he can’t. He has never needed to, which speaks volumes about his skill level. Hendricks has tremendous balance, which will make taking him down an exhausting endeavor. The Oklahoma native not only hits hard but is ridiculously accurate. One thing no one is talking about is the possibility of Hendricks taking down GSP. The same problem for him emerges as finding a way to keep him down will be extremely difficult.

At the end of the day, one will rise, and one will fall. GSP is the favorite, and rightfully so, but it wouldn’t be shocking in the least if Hendricks not only wins but finishes him. However, “Rush’s” specialty is finding ways to augment a fighter’s strength. This is what makes him so great, and doing so, again, this time around, would serve as the exclamation mark on his career. Going toe-to-toe with Hendricks is a fool’s errand, so mixing up and fighting outside with jabs and leg kicks will do more damage over time. While GSP will not have the luxury of out athleting Hendricks like he has everyone else, smart money says that, like always, Georges St. Pierre will find a way to win. We just don’t know how he will do it.