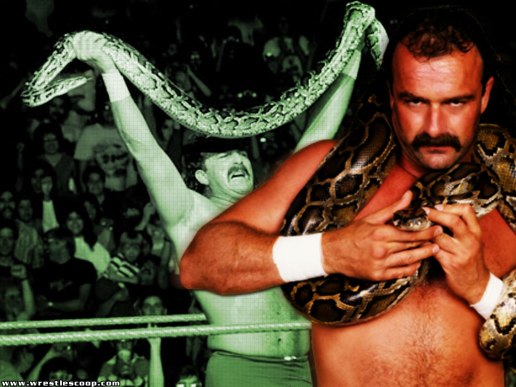 Originally written for and published by Camel Clutch Blog February 2014

Jake “The Snake” Roberts will be inducted into the 2014 class of the WWE Hall of Fame. Roberts’ trials and tribulations over the years are well documented and it’s inspiring to see that he has battled back from the point of no return. The Hall of Fame is an honor that is long overdue for the snake man, but I didn’t always think that way.

As a kid, I was the prototypical fan who booed every villain and cheered every hero. However, I was lukewarm about Jake Roberts. The DDT was cool and it was fun to see his pet snake Damien, but I didn’t believe he could beat up anyone. His feud with Andre the Giant going into WrestleMania V validated my belief. The only way Jake had a chance against Andre was to capitalize on the big man’s fear of snakes.

Fast forward twelve years later to 2000 and I’m training to become a professional wrestler at Slamtech: The Wrestling University. Learning ring psychology is a crucial element in putting a match together. Without it, there is no story being told and it’s just fake fighting.

My instructor, “Brutal” Bob Evans would list various wrestlers whom we were to find tape on and study what they did in the ring. Jake Roberts was one of them. I scoffed at the notion. Of course, I did this mentally because doing so out loud would have resulted in a plethora of Hindu Squats.

I got home from training that evening and watched Best of The WWF Volume 8. The main event featured Jake Roberts vs. Ricky Steamboat. The match was fantastic, but what I was blown away with is how Roberts performed. He played the crowd like a fiddle without throwing a single punch. The way he responded and retaliated to everything Steamboat did was simply brilliant. I was in awe and humbled by his mastery of the craft.

As good as his work in the ring was, his promos were a on another plane. Jake Roberts’ interview before his match with Ted DiBiase at WrestleMania VI will go down as one of the best ever. He didn’t yell and scream and simply promise revenge. He instantly brought their feud to a whole new level by stating

“Everything you stand for is on the line.” DiBiase’s hubris was the Million Dollar championship and losing it would have been his undoing. Of course, the nine-year-old me couldn’t appreciate the brilliance at hand, but the twenty-one-year-old me marveled at his genius. He spoke softly and carried a big stick as he lowered his voice so people would have to open their ears and really pay attention to his words.

Jake “The Snake” Roberts and the WWE Hall of Fame go together like peanut butter and jelly. He is one of the all times greats that is easily identifiable and a fair amount of non-wrestling fans are familiar with his character. Every move he executed in the ring and every word he uttered into a microphone meant something. Nothing was wasted and his performance shined because of it.

While his time in WWF is his most remembered, his stints as a heel in Mid-South Wrestling and in Mexico was some compelling stuff that is worth going out of your way to see. His body of work over the years is a perfect example of how beautiful professional wrestling can be when it’s done right.