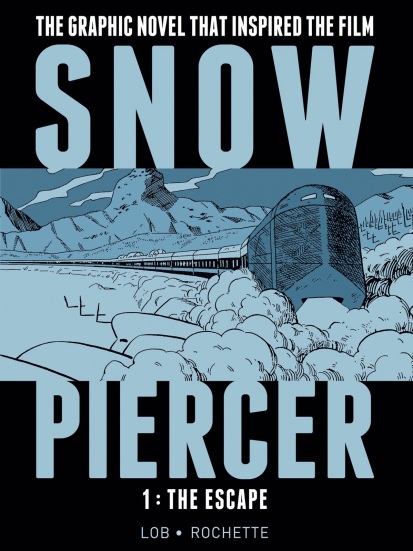 Snow and deadly subzero temperatures have blanketed the globe, killing off most life on the planet. What remains, lives aboard a train in perpetual motion.

As always, civilization, no matter how scarce the population, manages enact a class system. The rich live in luxury while the poor reside in the worst conditions.

Jacques Lob produces a story that is fascinating from many different angles. The train itself is a sign how close the human species is to extinction.

Yet, the gravity of the situation is lost on everyone as petty differences rise above the common good. The seeds are planted for a coup as we see how different parts of the train live along with their functions.

The black and white artwork fits like a glove because it serves a constant reminder of how icy and dark the world has become. The detail in Jean-Marc Rochette depictions serves the story well and just draws you in. Often times, I wanted to wrap a blanket around myself because I felt as cold as the passengers on the train.

If you didn’t know, this book inspired the film with the same title and staring Captain America himself, Chris Evans. Those of you who might want to skip these enthralling and thought-provoking pages for the silver screen adaptation would be missing out on a remarkable read. After all, Virginie Selavy didn’t translate this story from French to English for you to take the easy way out.