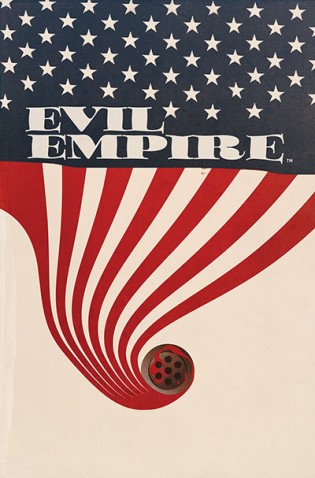 Max Bemis’ work on his debut series Polarity was trip down the rabbit hole of depression with a superhero spin to it. His writing spoke to me on so many levels because I felt the authenticity in his words which stems from his battle with bipolar disorder. Bemis brings the same genuineness to Evil Empire as he touches on our society’s state as a whole and the perceived BS that seemingly holds it all together.

Rapper Reese Greenwood’s lyrics inadvertently influenced presidential candidate Kenneth Laramy to murder his wife and brag about it in the name of real freedom.

His message is spreading like wildfire as people follow in his murderous footsteps. Reese feels she needs to stop this at the source and arranges a secret meeting between her and Laramy. One of the many great things about this series is how you think things will go one way, and then the direction takes a sharp 180-degree turn.

The artwork is great and chocked full of awesome character work, but it’s the coloring of Chris Blythe that makes the illustrations pop. You can tell that Max Bemis is a musician because everything in Evil Empire is executed with a perfectly timed cadence on all fronts.