Like many wrestling fans in Massachusetts, I discovered ECW while stumbling onto the Spanish channel at 1:00 a.m. I salivated over the brutality on my TV screen set as wrestlers hit each other with steel chairs and putting one another through tables as if it were going out style. Fans threw weapons into the ring, cussing illustrated the diversity of sentence structure, wrestlers mentioned other promotions by name and rabid fans who wanted blood were as common as a headlock.

The moments in ECW will go down as some of the greatest of all time, but there is one wrestler who captivated my attention like no other. He is 5’8 and 250 lbs. of Brooklyn aggression and he had me convinced that he was the baddest man on the planet. His name is Taz.

Before he was a color commentator, Taz was known as the human suplex machine. While the WWE was his biggest stage, Extreme Championship Wrestling is where he stretched, pummeled and submitted fools with an angry conviction that echoed his catchphrase “Beat me if you can. Survive, if I let you”. Crowds in arenas across the country chanted, “Taz is gonna kill you,” long before Samoa Joe arrived on the scene. You can even see a little bit of Taz’s influence in Stone Cold Steve Austin’s persona

The ECW faithful crowned him their resident badass of any squared circle. He was one of the few wrestlers in the land of hardcore who didn’t use ladders or chairs because his hands were his weapons. Taz’s aura created that mega-fight atmosphere that is sorely lacking in wrestling today. The Judo practitioner lived for the thrill of Taz-Plexing opponents and choking them out. His championship resume boasts three hardcore and tag team championships along with a TV title and 2 reigns as ECW world heavyweight champion.

5.) Tazz’s debut at Royal Rumble 2000: Kurt Angle was undefeated for the first two months of his WWE career and on the fast track to superstardom. The stage was set for the Angle’s open challenge. The color orange engulfs the Garden as the path of rage emerges from the entrance ramp. Taz made short work of the Olympian, thus ending his undefeated streak. He debuted in the same fashion he dominated in ECW with, and he impressed the casual fan who, up until that point, only heard the myth of the human suplex machine. It would also be the last time we’d see Taz pushed into prominence until he retired in March of 2002. 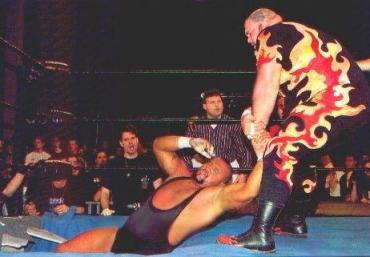 4.) Taz gets put through the ring: Bam Bam Bigelow turned on Taz in a tag team match at the ECW Arena involving the Triple Threat. They faced off at the Living Dangerously in March of 1998 with the TV title on the line. This was the first time Taz was going to wrestle someone he couldn’t manhandle. The match quickly went outside the ring as the champion Taz-Plexed Bigelow off the entrance ramp, into the audience. They brawled all over the Asbury Park convention center, and it culminated with Bigelow literally putting Taz through the ring to relieve the Tazmission. Taz lost the TV title, but it made him even more of a badass because it took something so drastic to keep him down.

3.) Taz brings the belt home: Mike Awesome jumped to WCW while still ECW’s world heavyweight champion because he wasn’t getting paid due to its financial difficulties. Fans and insiders were outraged over Awesome not dropping the belt before leaving. Lawsuits were filed, and heated words on both sides were exchanged. To keep everything out of the courtroom, Awesome agreed to defend the belt in ECW one more time. April 13, 2000, the eyes of the wrestling world were locked on Indianapolis, IN. Awesome came through the crowd with WCW security head Doug Dillinger. Who would come out from the curtain and defend ECW’s honor? To the shock of everyone, it was Taz. He made quick work of Awesome to capture his second ECW world title and, in the process, made history as a WWE contracted wrestler beat a WCW contracted wrestler in an ECW ring. 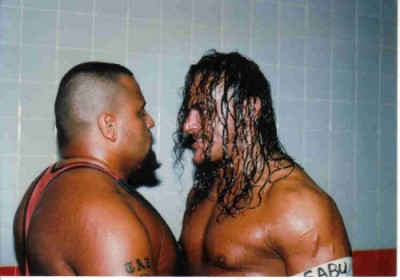 2.) Taz vs. Sabu Feud: Paul Heyman kept these two apart for 18 months as they agreed to never wrestle each other. Taz, the wrestlers’ wrestler, was racking up win after win while Sabu, the epitome of hardcore, was getting all of the press. Taz wanted the match and called out Sabu for over a year. It all came to a head at the 1996 November to Remember where the lights went off as Taz was choking out Heyman. The lights come up, and Sabu is standing in the ring. This led to their match at ECW’s first PPV, Barely Legal. Taz gained the victory but his manager, Bill Alphonso, double-crossed him. They traded wins back and forth until their final encounter at Living Dangerously 1999. Taz defeated Sabu to retain the world title and regain his FTW belt that Sabu won months earlier when Taz covered himself with Sabu’s seemingly lifeless body after knocking him out via Tazplex through a table.

1.) Taz wins TV Title from Shane Douglas at Wrestlepalooza 1997: WWF’s Jerry Lawler and Rob Van Dam and Sabu beat down most of the ECW locker room as the ECW Arena crowd was furious. With Shane Douglas looking on from a V.I.P balcony proclaiming, “I got no part in this,” all hope seemed lost until “War Machine” blasted through the speakers and Taz came to the ring. Lawler and company swiftly left the arena for fear of being choked out until Sabu returned to the ring for his scheduled match with Taz. The finish came when Sabu rolled backwards while trapped in the Tazmission and pinned him in the middle of the ring. Taz kept the hold on after the fact, and Taz-Plexed a sea of security guards for having the audacity to interfere with his business.

Shane Douglas yells at Taz from the balcony, insisting he stops stretching folks because he has seen enough of him for an evening. He and Taz get into a war of words that culminates with a challenge. If Taz taps out Douglas in three minutes, he wins the TV Title. If Douglas lasts the three minutes, Taz leaves the company for sixty days without pay. Taz could easily tie up the average guy like a pretzel in seconds flat, but the Franchise was far from average. What do you think happened next? With seconds left on the clock, Taz locks in the Tazmission, and Douglas taps out to thunderous applause as a new television champion was crowned.

3 thoughts on “Taz: A Look Into The Path of Rage”