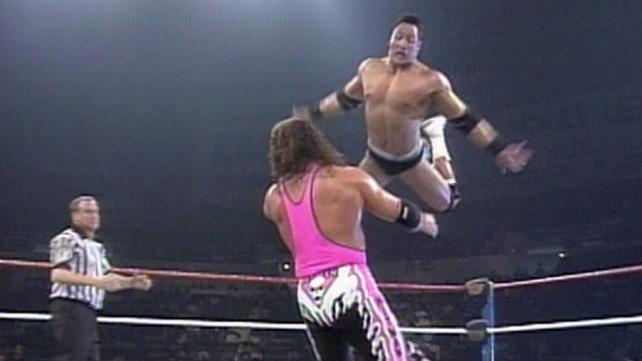 My neck of the woods here in Massachusetts is in for a historic blizzard where a statewide travel ban has been issued and heavy power outages are expected. WWE announced that this evening’s episode of Raw and tomorrows Smackdown taping in Boston have been postponed.

I can’t remember the last time that WWE had to cancel a TV show due to the weather. The pending storm is bringing back memories of the time where I foolishly braved the elements to watch a particular wrestling match.

It was my sophomore year of high school and the April Fools Storm of 1997 was in full swing. I was counting down the minutes with baited breath until Monday Night Raw came on the air. The reason I was so excited is because The Rock, known at the time as rookie upstart Rocky Maivia, was defending the Intercontinental Championship against Bret “Hitman” Hart.

Anybody that knows me can tell you that I’m a huge Bret Hart fan. He is my favorite wrestler and back then I so desperately wanted him to win his third IC title. An hour before the show went on the air, I lost power. It didn’t matter though, mother nature wasn’t going to deny me this moment.

I knew certain parts of the city hadn’t lost power, and my friend Bryan lived in one of those areas. I called him without a second’s hesitation and asked if I could come over his house to watch Raw. Bryan was a casual wrestling fan who didn’t watch every episode.

I jetted out the door faster than a speeding bullet without telling my mother as I made the two mile trek, without my hat and gloves, in heavy snow, wild winds, and slippery sidewalks to Bryan’s house. I made it just in time for the start of the show.

This episode of Raw was also the night when Bret reunited with Davey Boy Smith and Owen Hart after years of in-ring conflict. Bret was one week removed from his anti U.S.A. heel turn and twisted the knife even more when he blamed the American fans for pitting them against each other.

Smith approved, Owen cried, and the three of them hugged it out as Bret looked out to the crowd with a piercing look of disgust. “YES” I said aloud as the Hart Family was stronger than ever and that belt was as good as Bret’s.

The power went out at Bryan’s house during the Goldust vs. Hunter Hearst Helmsley match and I was riddled with anxiety because I NEEDED to see this match. The lights came back on a few minutes later and Bryan turned to me with a smile and said “Wow, you are lucky.” You’re damn right I was.

I watched the rest of the show with this paralyzing fear that we were going to lose power again and for good this time. My fears were unfounded as the main event finally arrived. Thinking back on it, this was The Rock’s biggest match at the time and Hart made him look really good.

This is probably why I was so shocked at the time that they were going toe-to-toe instead of Hart beating him in a landslide. Victory looked like a sure thing for the Hitman, until he made the most inexplicable decision I had ever seen him make.

Bret Hart got disqualified when he refused to release the ring post figure-4 leg lock.

What the hell was he thinking? Bret Hart, this master tactician purposely cost himself the Intercontinental title because he wanted to send a message to America. This messed with me on so many levels and it took me a while to forgive his apparent lapse in judgment.

Looking back on all of this, I totally hijacked Bryan’s evening. For all I know, he had other plans, but he was a trooper and allowed his friend to witness what should have been a glorious moment for the excellence of execution. Good lookin’ out, Bryan.

One thought on “Braving The Storm For Bret Hart”

🚨@provinggroundhd presents ‘Ultimate Alliance’ on 8/21 at the Black Box Theater in Peabody, MA
Anyone else having issues with @peacocktv ??? #MITB
Night 1 of #FyterFest is in the top five of #AEWDynamite episodes.
RIP “Mr. Wonderful” Paul Orndorff
Bandido wins the ROH World Championship at #ROHBITW. They certainly didn't make him feel like a champion. He got beat the majority of the match, wins out of nowhere, and beatdown by LFI to close the show.
Chelsea Green appears at #ROHBITW, announces she's signed with the promotion, and threw some shade at her former employer.
Follow Ringside Logic on WordPress.com