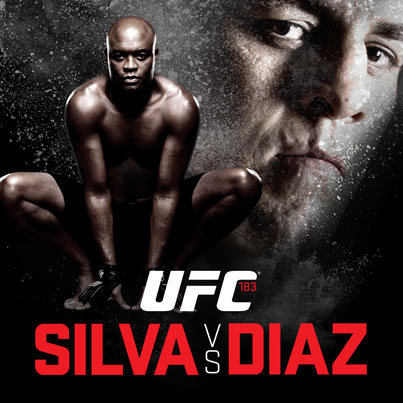 Anderson Silva vs. Nick Diaz main event at UFC 183 is a fight that was never supposed to be made. A middleweight that walks around at 220 lbs. and a thinly framed welterweight doesn’t make sense in the combative sphere of the MMA. However, a gruesome injury, along with the eclectic desire to only vie for a high valued prize, suddenly made this bout go from impractical to something that makes complete sense.

Silva is coming off a thirteen-month layoff after recovering from a broken leg he suffered in his bout with Chris Weidman. Diaz emerges from a 22-month retirement where a seven-figure payday in a loss to Georges St. Pierre made him very selective on who he does business with inside the confines of the Octagon.

“In what world does that make sense?” UFC President Dana White uttered when Diaz called out Silva almost three years ago. It seemed like a fun idea until you took the time to break the fight down on paper and the excitement quickly erodes, as it appears that the Stockton native is very outmatched.

A warm-up fight is an obvious course of action for Silva since his left leg was snapped in two. The former middleweight kingpin is a high-value commodity, which commands an opponent of equivalent value. Diaz fits the narrative like a glove and comes with the uncanny ability to talk people into buying his fights due to the unrelenting amount of verbal venom he spews towards his opponent.

In a peculiar twist of fate, Diaz has been relatively quiet leading up to the bout. His penchant for no showing UFC media events remains intact this week, but there are no sound bites that stir up a wide array of emotions from fans and fighters alike. Six months ago, you would have called me crazy if I told you there will be minimal buzz during fight week.

You can’t blame Diaz’s relatively good behavior for the bout`s lack of attention. Silva’s mystique of being the greatest of all time is usually enough for our consideration. One year has made a big difference as Silva is 39 years old, a surgically repaired leg, and Jon Jones is super close to passing him on the all-time list.

If all things are equal, Silva wins this fight via referee stoppage due to superior striking that opens up the scar tissue on Diaz’s forehead. If Silva no longer has the greatness within him, or perhaps he is tentative to throw kicks, he could be in for a rough night.

Diaz’s affinity for the sweet science has kept the Gracie Jiu-Jitsu black belt off the ground for his last four fights. While he isn’t a big double leg takedown guy, he is slick at getting the fight to the ground during a scramble. If cardio becomes a factor, Diaz can swim in the deep end all day and control the bout’s pace.

This could be kickboxing vs. boxing match with both fighters having pinpoint accuracy with their punches. Silva is bigger, hits harder, and has better head movement, but Diaz has outstruck a plethora of fighters who, on paper, should have blitzed him on the feet. If this becomes a grappling match, Silva’s defense won’t last long against Diaz’s technique.

The problem with breaking down this fight is that we don’t know what version of Anderson Silva we will get on Saturday night. We never know what we will get with Nick Diaz, which adds even more intrigue to the bout. Diaz is always full of surprises, but unless Silva is past the point of no return, there are too many things going against Diaz, which should spell victory for the Spider.

The Pick: Anderson Silva via referee stoppage in the 3rd round