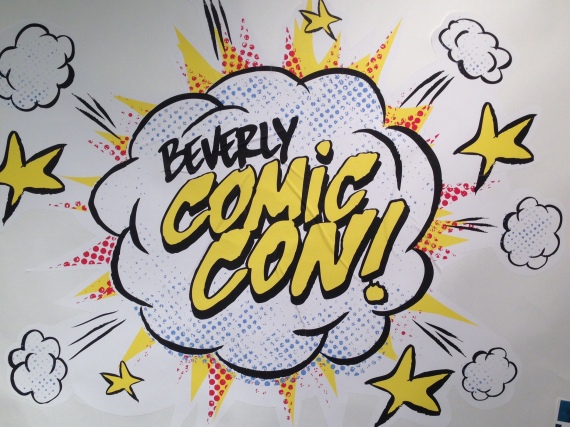 I’m late to the party with this one, but I wanted to write about my experience at Beverly Comic Con 2. Some of you might be thinking, what and where is Beverly? Well, Beverly is a city in Massachusetts. It’s about 30 minutes outside of Boston, boasts a population of approximately 39,000, and if you ask its citizens, she is the birthplace of the U.S. Navy.

This sounds like a weird place to hold such an event since most comic book conventions occur in major metropolitan areas such as Los Angeles, Chicago, Baltimore, Boston, and San Diego. Also, I grew up in Beverly, and for a long time, it was a place that, in my opinion, was allergic to fun. However, over the last five years, there has been a social revitalization that has been inspired by and celebrates art, music, and culture.

Beverly Comic Con was born from the ashes of Boston Comic Con being postponed due to the tragic events of the Boston Marathon bombings in April 2013. With the comic book world all converged in one place and nowhere to go, comic book shops across New England reached the displaced creators and booked them for last-minute appearances.

Artists Adam Miller, Andy Houle, and others had planned on unveiling their latest project at Boston Comic Con and decided to organize an impromptu gathering for artists and fans, which would ultimately become the first Beverly Comic-Con. The convention’s sophomore offering hailed from the Studios at Porter Mill in downtown Beverly. Artists, vendors, and a DJ filled the space with comic curiosity as fans, cosplayers, and families took advantage of the event’s FREE admission.

Usually, I am someone who gravitates toward the writing side of comics. Still, this artist heavy event produced a very welcoming atmosphere with a great mix of local artists and established comic book artists showing their stuff. Former Batgirl and Transformer artist Robert Gill was very approachable and easy to talk to.

We hit it off right away as I admired his Castle Grayskull business cardholder. Gill appreciated that I noticed it and was shocked no one else had done so. Gill signed an exclusive contract with Valiant Entertainment and worked alongside New York Times best-selling writer Greg Pak on the ongoing series, The Eternal Warriors.

Oftentimes, any Star Wars art piece would have had me at hello, but a screen print displaying the characters and themes of the film A New Hope had me at the first syllable. Artist Emily Dumas created this limited edition screenprint, and I couldn’t give her my money fast enough. This geeky piece is proudly displayed in my home office.

Another piece of artwork that I picked up was this emotionally drawn depiction of Superman hovering among the clouds. Superman is my favorite superhero, so I can be a little snobby when it comes to items carrying his likeness. I knew my interpretation of the image at first sight, but I had to make sure the creator was thinking the same thing.

Artist Heather Scoggins told me this was her depiction of Superman pondering who and why he is. She went on to say that her favorite stories revolve around Superman trying to find his place in the world. Those just happen to be my favorite stories too. At that point, I knew this was drawn by someone who really gets Superman, and I had to add it to my collection.

My wife and I found our way to a particular table, and we were taken aback by the stunning imagery of various pop culture icons. “Excuse me,” my wife said with curiosity and excitement as she was looking to obtain some price information. The table owner turned around, and I was surprised by the unexpected pleasure of connecting with someone I hadn’t seen in ten years.

The table belonged to Muralist Jason Casey. I met Jason when he was in art school, and seeing his work after so many years was a real treat. My wife fell in love with his mural of Janis Joplin, and the image above doesn’t even do it justice. The amount of painstaking detail that went into it can only be really appreciated in person. We also took home a mural of Yoda because, well, Yoda is the man, and he shares our dog’s name.

Being surrounded by a funky cool cornucopia of art gave me a deeper appreciation for artists’ work that I didn’t have when I walked in. Event promoter Andy Houle was a pleasure to talk to, and his passion was evident when hearing his thoughts, ideas and seeing his work on display. He seems like the right person to hopefully make this into a yearly event as Beverly Comic-Con was a one-day hit that produced an endless amount of smiles.