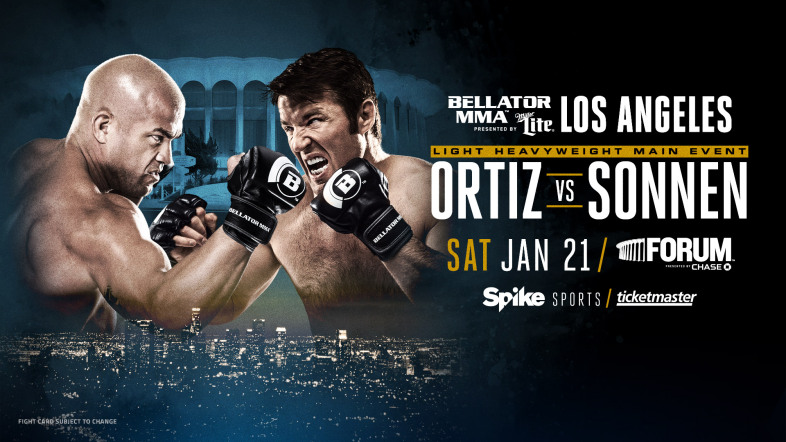 If you ever wondered what it would look like if two professional wrestlers fought each other in an MMA bout, Bellator will deliver the closest thing to it on January 21 when Tito Ortiz squares off against Chael Sonnen in a light heavyweight main event. They both grew up as wrestling fans and have nicknames that firmly pronounce their colorful personalities.

The bravado of Ortiz’s fiery clad “The Huntington Beach Bad Boy” is the perfect foil to the boisterous Midwesterner in Sonnen aka “The American Gangster.”  If that’s not enough, the nucleus of their combative arsenal is a grinding wrestling style to punish their opponents against the cage.

There’s even a built-in storyline where the two wrestled each in college and in that match, Sonnen won by pinning Ortiz on his birthday. Now, Ortiz wants to avenge that loss in the cage. Hell, Sonnen and Ortiz even tried their hand at the mat game’s theatrical counterpart.

Sonnen made it through an intense WCW tryout in 1998, got invited back, decided to finish college first, and by the time he had finished, WCW was gone.

Ortiz made several appearances in TNA, including a few guest referee spots where he mixed it up with James Storm and Jeff Jarrett.

Now 41, Tito Ortiz, who has found new life in Bellator after being the face of MMA, years earlier, during the sports darkest period. Chael Sonnen, 39-years-old, is coming out of a two-year retirement, which ran concurrent with a suspension for the use of performance enhancing drugs.

It will be interesting to see how the fight unfolds as both fighters have a strong wrestling base with limited striking and submissions skills. If Ortiz can’t take Sonnen down and vice versa, we might have a sloppy looking but fun slugfest on our hands.

Two days after the fight was announced, Sonnen’s wrestling inspired heel persona kicked into high gear with some trash talk. “Tito Ortiz two weeks ago had his prize Rolls Royce repossessed. If he could have got this fight in time, perhaps he could have preserved the car. But at the end of the day, listen, it is the Bad Boy vs. the Bad Guy.”