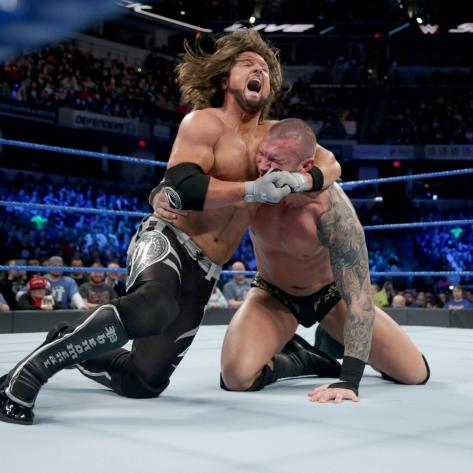 I apologize for being late to the party with one, but I watched a really, really good wrestling match last week. It won’t go down as an instant classic or awarded five stars among journalists, however, the wrestlers took their time telling a fun and engaging story.

Whatever do I mean? Well…

Wrestling is an art form like any other creative and entertaining means of expression. Sometimes, in a particular space, certain nuances fall by the wayside, looking to be picked up again. In wrestling matches, it’s the little things that can make all the difference.

Over the last few years in WWE, punches, kicks, submission holds, and selling has been devoid of any real intensity and effort. Also, the action in the ring is too fast and does not leave enough time for anything to properly marinate with the audience.

Instead, back-and-forth matches, where the wrestlers take turns delivering big moves, appear to be a substitute for an arbitrary application of the smaller moves that support the assembly of a match.

Now, I know I sound like that older guy that emphatically claims it was better in my day, but stay with me.

Randy Orton and AJ Styles (SmackDown 3/7/17) battled it out to decide who would headline WrestleMania against the WWE Champion, Brat Wyatt. Styles earned the title shot that Orton, unbeknownst to everyone, abdicated only as a ruse to get revenge on Wyatt. With two challengers in play, the match was made to declare one undisputed contender.

This eighteen-minute wrestling match was well worked and its story was told in a manner where everything made sense. The slow nature of the match suggests that its style was more suited to how Randy Orton applies his craft, but that’s not a knock…and besides, AJ can adapt to any form.

There were big moves mixed in with Styles working over Orton’s leg that culminated with a fantastic finish. Styles went for the Phenomenal forearm, Orton tried to counter it with an RKO, Styles saw it coming, so did Orton and he took a back bump instead. Styles went for a springboard 450 splash, Orton moved out-of-the-way while Styles rolled through to his feet and caught him with an RKO for the pin.

What made this match stand out was how both wrestlers took their time doing everything. Punches were thrown with intense intent as opposed to a rapid slovenly succession. Kicks and stomps were well-timed and well-delivered with enough breathing room in between for the opposing wrestler to sell the damage being done to their body.

Randy Orton has been known to phone it in during a match, but he didn’t do that this time, which is good since Orton vs. Styles is a match that fans had clamored for and this was their first encounter. Styles is always on point and the two put on the first of what should be a collection of memorable matches that above all else, tell a clear story where nothing is wasted and everything matters.