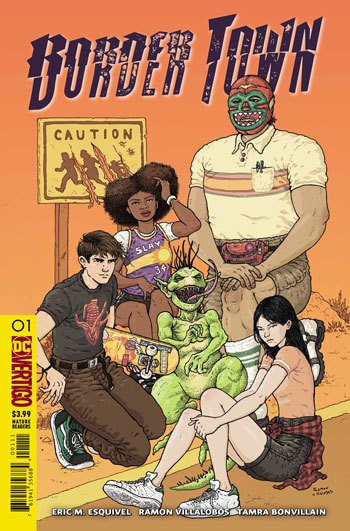 Written for and published by Forces of Geek September 2018

What if your town has a problem with otherworldly monsters, only to bring upon its victims a most gruesome death?

Think about it long and hard.

Now, imagine the cause of that problem being blamed on those “dang illegals” because isn’t everything their fault?

Racial tensions with a supernatural twist ushers in the ongoing weirdness that ensues in Border Town’s setting of Devil’s Fork, AZ.

Part social commentary and part horror story leaves the subtlety at home as writer Eric Esquivel delivers a hyperbolic memoir of his teenage years in Arizona.

The story is told primarily through the lens of a bi-racial Mexican/Irish teen, Francisco Dominguez, who goes by Frank.

Frank is the new kid in school and finds himself in trouble rather quickly due to the complicated relationship he has with his ethnicity.

Being biracial is not as simple as some may believe. Speaking as a biracial African/Irish person, some might feel consumed by the world at large. Society will look at someone in one light while the individual will see themselves in another. Along with his straight hair, Frank’s completion is light enough where he passes as Caucasian until the other half of his ethnicity is revealed.

From there on, his confrontation with a skinhead automatically makes him one hundred percent Mexican. Socially speaking, it’s hard not to have a say in your own ethnicity. In this maiden voyage, however, Frank seems to take it in stride. We meet Frank’s new friends including…well, imagine if Sloth from The Goonies was a masked luchador.

Political themes woven with the narrative’s eerie setting is unapologetic with its staunch conveyance. “Make America Great Again” is vigorously uttered by some Alt-right types while the tear in space and time that allows the monsters to invade our world is literally on the Mexican/American border.

That is the kind of irony that slaps you right in the face.

“What kind of Mexican is that?” asks a border patrol agent, in reaction to a sombrero-wearing, green hulking monster, which encapsulates Ramon Villalobos’ esthetic throughout the book. The style of illustration perfectly matches the story. The color palette of warm orange skies and peaceful desert landscapes highlights the beauty atop the abhorrent nature of things. Some would say this is the perfect way to describe Arizona today considering the state’s political climate.

Vertigo titles tend to make readers think more than your average cape and cowl book. Eric M. Esquivel’s script is as thought-provoking as it is ludicrous.

Observations, winks, nods, bloody imagery along with fun and insightful character development serves as a reminder that everyone has their fight in these politically charged times. Despite the very real message, it’s the ridiculous chronicle of events in this first issue that takes center stage. A skeleton monster demonically screaming, “…you fucked up!” made me wonder what the hell I had gotten myself into…and I can’t wait to see what happens next!