During my formative years, the only thing that rivaled my love for bear hugs and body slams were four brothers from the sewers of New York City. WWE Hall of Famer Sting and Nickelodeon announced at New York Comic Con that WWE and Teenage Mutant Ninja Turtles have joined forces for an action figure collaboration titled Ninja Superstars.  END_OF_DOCUMENT_TOKEN_TO_BE_REPLACED

IDW’s Teenage Mutant Ninja Turtles #44 featured the death of Donatello which capped off a four issue story arc titled Attack on the Technodrome. A second printing has already been ordered and will be available on April 8th. Most comic book stores were sold out of the book within minutes of its release, which has made the first printing a tough item to acquire.

So, why kill Donatello? While the series is consistently one of the best reads on the shelf, it was the right time for something drastic to occur. Team members die and return to life in comic books all the time, which often cheapens eerie hold that death is supposed to hold over someone.

The team dynamic will be different going forward because Donatello was the smart one and his intelligence was often the key in getting the team out of sticky situations. That is gone now, and adjustments will have to be made which should provide for some interesting stories down the line.

I wrote a column at Forces of Geek.com reviewing the last five issues of the series which shows how this moment was set up along with everything else that was happening with out favorite turtles. Click here to check it out.

I watched the newest Teenage Mutant Ninja Turtles movie and I was thoroughly entertained from beginning to end. The 9-year-old me who saw the original 1990 film on opening weekend would have had his mind blown by this silver screen incarnation of turtle power. END_OF_DOCUMENT_TOKEN_TO_BE_REPLACED 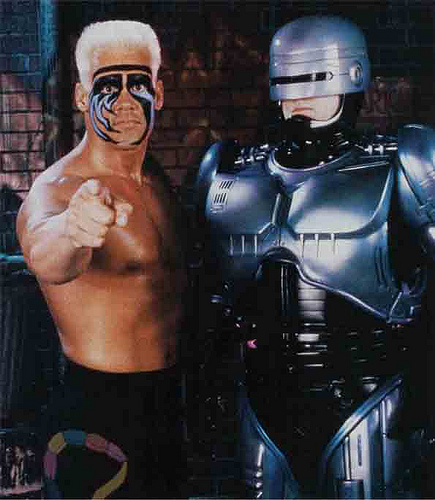 In honor of the RoboCop reboot hitting movie theaters today, I feel it’s only appropriate to reminisce about one of wrestling’s greatest moments. Ok, I’m joking. People hated it and its widely considered the most preposterous publicity stunt in the history of wrestling. As a nine-year-old kid who thought wrestling was real, I loved it. My imagination ran wild with possibilities as the cybernetic law enforcement officer found a new partner in a man called Sting. END_OF_DOCUMENT_TOKEN_TO_BE_REPLACED