Over the last couple of years, I’ve been on a quest to pen love letters to my ten favorite wrestling matches. Nine of them have already been written with one more to go. Professional wrestling, like any form of entertainment, is subjective. What I like is going to be different from what someone else enjoys, and that’s ok. That is part of the reason why I wrote about each of these matches. To celebrate, not delineate, or force my opinion upon anyone. As my good buddy Dave once told me, “Hey, you like what you like.” END_OF_DOCUMENT_TOKEN_TO_BE_REPLACED

During my formative years, the only thing that rivaled my love for bear hugs and body slams were four brothers from the sewers of New York City. WWE Hall of Famer Sting and Nickelodeon announced at New York Comic Con that WWE and Teenage Mutant Ninja Turtles have joined forces for an action figure collaboration titled Ninja Superstars.  END_OF_DOCUMENT_TOKEN_TO_BE_REPLACED 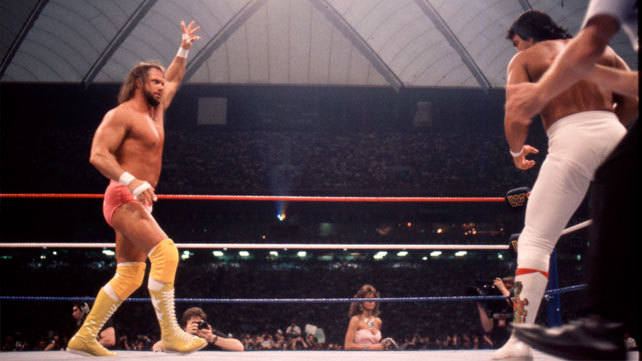 On March 29, 1987 at WrestleMania III there were 78,000 fans who were enthralled with every slam, punch and suplex thrown in a match that involved two of the best wrestlers on the planet. When the final bell rang at14:35 in the contest, Ricky “The Dragon” Steamboat was crowned as the new WWF Intercontinental Champion by defeating Macho Man Randy Savage. This is arguably the greatest wrestling match of all-time, however, its reputation has been tarnished over the years due to how the match was prepared and laid out.   END_OF_DOCUMENT_TOKEN_TO_BE_REPLACED 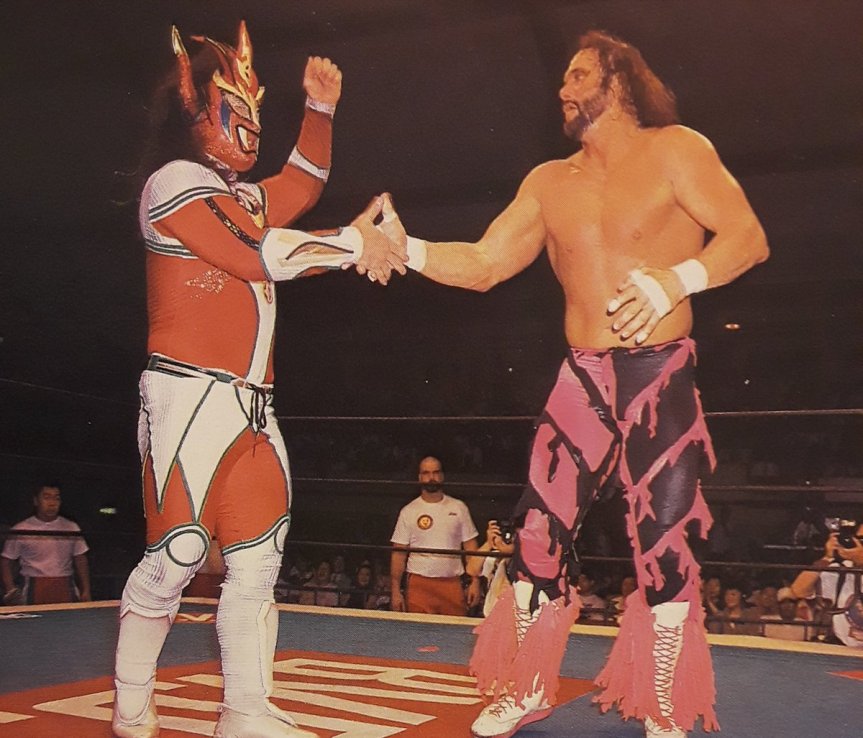 One of the fun things that comes with being a fan of any genre are the undiscovered gems you stumble upon. That wow factor kicks into overdrive because it sounds too good to be true when you find something that you never knew existed.

‘Macho Man’ Randy Savage and Jushin ‘Thunder’ Liger are two of my favorite professional wrestlers. Up until this past weekend, I would’ve called you a liar if you said they actually wrestled each other. Well, they did in fact tango in the squared circle.

Their one and only encounter took place on July 17, 1996, in Sapporo, Japan, during a New Japan Pro Wrestling tour. Savage was one of four wrestlers representing WCW and hurt his leg on a dive the night before in a losing effort to Ric Flair.

According to the Wrestling Observer Newsletter, a sellout crowd 6,400 fans filled the Makomanai Ice Arena as Savage hobbled to the ring for his showdown with the esteemed junior heavyweight. Liger entered next with his usual flash and energy as an admirer handed him a bouquet.

While the match was only eight minutes and really nothing special, it was a nice novelty to see two of the all-time greats dance one time. It was odd seeing Savage being the bigger of the two wrestlers since he was often the smallest guy in the ring.

Despite winning the match with his patented flying elbow drop, Savage really worked to put Liger over as a serious threat. He played defense most of the time due to his leg injury, sold like a champ for the palm strike, and took a Liger Bomb.

Wrestlers have always been expected to wear their working shoes when traveling to Japan. However, looking at the landscape of superstar American heavyweights at the time, I don’t think that many of them would have gone out of their way to make a wrestler in a weight class below look like credible.

It was fun to see Savage out of his element and with Liger. Again, the match is nothing to write home about, but this one time encounter is worth a gander if you a fan of these colorful titans of the mat. The Madness versus The Thunder, Ooh Yeah!

After all this time, it’s finally official. Macho Man Randy Savage will be inducted into the WWE Hall of Fame the night before WrestleMania 31. Regardless of what anyone thinks of the HOF’s legitimacy, Savage’s induction is long past due.

To me, Randy Savage will always represent the moment professional wrestling became a lifelong passion of mine. While channel surfing on a hot summer night in 1988, I stumbled upon a Mega Powers promo and was immediately drawn in as they vowed to bankrupt the Mega Bucks at Summer Slam 88.

END_OF_DOCUMENT_TOKEN_TO_BE_REPLACED

Most people that dream of a career in athletics or entertainment aspire to be a world champion or recognized by an academy of their peers as the best. I, on the other hand, had childhood ambitions of becoming the WWE Intercontinental Champion. Sounds kind of odd, right? Someone dreaming of being second best instead of number one is not normal. The thing is, I didn’t look at it that way.

Those who watch professional wrestling enjoy it for one or all of its different facets. I enjoy it for the matches more than anything and to me, the WWE title meant you were the biggest star while the IC title states that you were the best wrestler. That’s what I wanted to be, the best wrestler and tell great stories in the ring like Don Muraco, Ricky Steamboat, and Randy Savage.

Intercontinental title matches were one of, if not, the hottest match on the card. Summer Slam 1991 was a significant moment for me as a wrestling fan. Bret Hart upended Hulk Hogan as my favorite wrestler when he defeated Mr. Perfect for the title. Their match spoke to me in a way that I can barely put into words. It was epic, dramatic on its own accord, and was simply about being the best wrestler.

The IC title was highly regarded and held such prestige. Today, not so much. It’s an afterthought at best. So, I wrote about how WWE could fix that problem for my debut article at What Culture.com where I was invited to join them as a featured columnist. I’m very appreciative of this opportunity and can’t wait to get into the thick of things. Check out 5 Ways WWE Can Make The Intercontinental  Title Relevant Again.

The WWE Championship is the holy grail of professional wrestling. It’s the belt that every aspiring and current wrestler dreams of holding. Having this honor bestowed upon you means you are the best that this business has to offer.

Today, I will rank the top ten WWE Champions of all time.

To say this list was hard to compile would be a colossal understatement—42 wrestlers over 50 years made for several list changes. The thing to remember is that all lists of this type are subjective. You do the best you can with criteria that make sense to you.

For example, Money is extremely important, but being a big draw doesn’t define a wrestler. Iron Man 3 made over four hundred million at the box office, but it’s not winning Best Picture at the Oscars.

Without further ado, let’s get started.

END_OF_DOCUMENT_TOKEN_TO_BE_REPLACED

In the Summer of 1996, Professional Wrestling’s Monday Night Wars were heating up. The nWo became an instant ratings bonanza for World Championship Wrestling while the World Wrestling Federation was struggling for their piece of the pie. In August of that year, Jim Ross announced that Diesel and Razor Ramon were heading back to WWF. This created a tidal wave of controversy as the men who performed as Razor and Diesel, were under contract to WCW.

END_OF_DOCUMENT_TOKEN_TO_BE_REPLACED

Conquistador is Spanish for “conquerors” and is applied to Spaniard soldiers who explored the New World in the 16th century. In the late 1980’s, the squared circle of the World Wrestling Federation were treated to Conquistadors of a different variety. Gone were the warriors of strategic battle tactics and enter the two individuals who never came close to conquering anything.

END_OF_DOCUMENT_TOKEN_TO_BE_REPLACED

(Written for and published by gerweck.net)

As the WWE celebrates the 25th anniversary of their summertime extravaganza, a trip down memory lane seemed appropriate. 1988 was not only the first installment of this popular yearly event but the first pay-per-view event I ever watched.

August 29th of that year was only the second day of my wrestling fandom. An episode of “The Superstars of Wrestling” the night before sucked me in as the “Mega Powers,” comprised of Hulk Hogan & Macho Man Randy Savage, hyped their tag team match against Andre the Giant and The Million Dollar Man Ted DiBiase, the “Mega Bucks.”